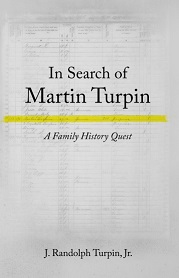 In Search of Martin Turpin
A Family History Quest

Thousands of Turpins are historically connected to one lone teenage boy floating down the Clinch River in the year 1798. The boy's name was Martin Turpin. He originated out of Virginia, and he entered Tennessee on a raft. Martin Turpin was the first of the East Tennessee Turpins.

That was all that was known about Martin, until nearly two centuries later when the author went searching for him. Part One of this book is the written account of that quest. Part Two is the story of Martin Turpin's life.

Martin Turpin's story begins with a pre-history reaching back to the days when the Turpins were Vikings. From Norway they invaded France, and from France they joined William the Conqueror in the conquest of England. From England they settled in colonial Maryland, and then they pioneered Virginia, Kentucky and Tennessee.

Although this book was written to satisfy the genealogical curiosities of Turpin family researchers, it also serves as a valuable resource for students of colonial and post-colonial American history. 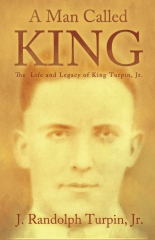 A Man Called King
The Life and Legacy of King Turpin, Jr.

What difference can one life make? Born in 1903 as the son of a wanderer in East Tennessee, King Turpin’s childhood was everything but stable, but an encounter with grace instantaneously transformed his life, and for the remainder of his days, faithfulness to God became his highest ambition.

This narrative is based on the memories of the people who knew King and is informed by thirty years of research. Here are enlightening descriptions of King's life as a vagrant in the Tennessee River Valley, as a cotton mill worker in Knoxville, as a miner in Kentucky, Arizona and West Virginia, and as a farmer-miner-preacher in the Appalachian mountains. It is a story filled with amazing incidents of faith in the midst of hardships and dramatic manifestations of God's power. The story of King Turpin, Jr. demonstrates the significance of a life devoted to God.

Written as a tribute to King Turpin with the intent of inspiring faith in God, this book also contains valuable information for researchers exploring Appalachian culture and the history of other East Tennessee Turpins.